We’re back here for a brief update on the “evolution” of my work on the most beautiful game in the world … and buggy! The goal is, as always, getting to play, after Christmas, a career mode relatively realistic, graphically fulfilling, fun, and, as much as possible, freed from the boosts of the CPU that makes invincible certain home games against… Carpi! It would be nice to have a market a bit more realistic with no simultaneous sale of Lewandoski, Muller and Alaba in a single market window… as if Bayern was about to end!

It is not easy to get good results and avoid crashing or similar to the third or fourth year: it takes a great knowledge of the game and the database in particular, because everything is connected and editing a simple string in the cmsettings.ini often causes imbalances that come out gradually. In addition, major uncertainties remain about the meaning of a lot of strings and the actual behavior of some parameters whose change would seem to have to produce results… which do not come! The suspicion that in the executable are scattered various forcings (hardcode) is now almost a certainty!

For a career mode that will last more than a couple of seasons, all the patches that should obtain substantial improvements of the gameplay through the massive editing of players values in the database are unfortunately impracticable: they all forget to adapt accordingly the parameters of regeneration of players (rebirth) and often even the table for the youths of the academy!

I tell it like it is and the results that I obtained with my research and my attempts!

First, it is interesting to note that changes to the initialization files of the career mode take effects immediately, game by game and during current career, unlike the changes to database and compdata, whose results are seen only when starting a new one.

Regarding the cpu boosts or, if you prefer,  “the momentum”, I disabled (or modified) almost completely the “adaptive difficulty” which consists of a series of “situations” to the occurrence of which the cpu increases or diminishes its “power”. What exactly are the parameters affected by these changes remains a mystery, but the effects of the edits, would seem to be “real”, so that, for example, play one juventus-lanciano, at expert level, can now finish 10-0 and scoring a lot of goals in the second half! With the original parameters the ‘AD’ would came into play and after the fourth goal scored and many shots on goal, and would transformed regularly the Lanciano in Sacchi’s Milan, making the game suddenly and “inexplicably” much more difficult!I tried to turn on and off a number of other strings, but, objectively, without getting reliable results: the key, in my opinion, are the tiers, which leading to a re-balancing of the factors according to the team overall and that, despite several attempts, I have not managed to eradicate! This year I started to reevaluate everything from a different approach, we will see… More likely, as mentioned above, the effects of changes in these and other parameters are “canceled” by some type of coding present in the “exe”.

With regard to the market there are good and bad news. It was not difficult to get a greater number of approaches nor to shorten the “time” for the conclusion of transactions and make sure they will be completed often. Easy also impose greater movement to small and medium-sized teams.
And we can enhance the value of the Italian championship (or any other nation) so that even important players can move into our teams!
There is no way instead of reducing the number of top players transfers: in this regard comes into play something else. It remains the hope of finding a better balance between the teams budget and the settings that determine the range of spending of each league and country, to prevent, at least, that a club may sell all the best in a single window market only because it plays a minor rated tournament!

Now some news about the Controller: in the download area, there is a new update (minor update) that will not be automatical. This release fixes a bug of the Installer which put fancards in a wrong location and, above all, significantly speeds up the execution of script commands to the players.

At the request of a friend, I have set up a macro that enables all ‘hidden’ audio calls (callnames), already in the archives but for various reasons not enabled in the database.
Since I have not had time to update the templates of the i68Scripter, here how to use it: you simply create a new text file, and write the following command, than save and reload it with the Installer (or the Scripter, of course!). Do not forget the parentheses: 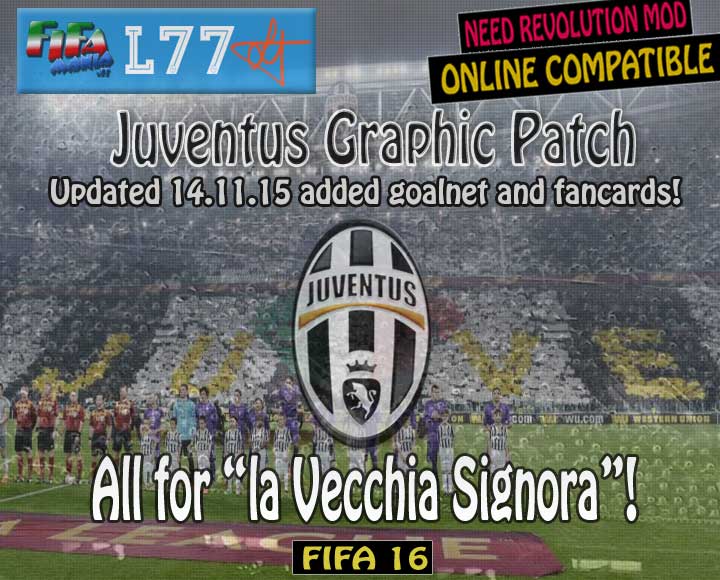 Finally, as promised, I updated the Juventus Graphic Patch with a new version enriched and fully compatible with FIFA 16 and Moddingway 1.1! For the more advanced features you need the RevolutionMod properly installed!