The news of today is that, corrected all the names and logos of teams and tournaments, I just started my first career in FIFA 16! And you say … and who cares?! Right, right … but not quite!! In fact, as I try to enjoy and move forward, step by step, in my personal knowledge of the new game, I note the flaws, I try to correct them, I need features old and new, I discover some bugs of my program, in short, many things, that if shared can serve to others, and, above all, to you who follow me!

I had never done before, so I chose to begin my adventure as manager in Belgium, on the bench of the Standard Liege, a prestigious team of high ranking, but that certainly is not the favorite for the title. As you know I hate those who always win… 😀

The summer competitions introduced this year, as well as to give a little of fantamoney useful for the market, it served mainly to test the graphical aspects specific to my new team, important for a gaming experience satisfactory. I had no doubt about it and I had to find that the Jupiler Pro League is quite battered by mom EA, it lacks many coaches, stadium names, third kits. As always, default banners and flags suck, but fortunately, Uomomagnetico has made them, and I want to thank him for his enormous and great job!

So I began with a will: taken as the basis the Moddingway Mod (0.52, soon a “fair” review!), I made a first script to perfect the team names and add all the coaches. For the stadiums names I could have used the Merger, in ‘add and change’ mode, by loading the table already completed last year from the Fifa15 database. Could… because the tool does not work anymore! Unfortunately, I must have done something bad over the last updates. In the coming days I’ll try to fix everything; meanwhile, I apologize, with those who were trying to use it, remaining disappointed (which in Italian is even literal rhyme!). [P.S. The exe it’s been already updated, if you experience problems download it again! :)]

And then I began to do the third kit! Nothing fancy, mind you, there are dozens of kit makers better than me which realize high definition works, in with an extraordinary attention to details. I am satisfied to make a decent job, accurate enough, using the knowledge I have acquired over the years in the field of bump maps. And just the bump maps, these unknown … are the main topic of today. I noticed that many of the best kit makers around make wrong bump maps or do not fully exploit their potential. Hoping to please you, I report here the result of my studies on the subject, dated 2011 and already published in Italian in the forum of fifamania.it, in the days when I realized my KitManager. The tests that I did creating the Standard’s kit, show that they are still valid.

I write this not with the presumption to make the professor, but with the desire to share knowledge I acquired with analysis, research, attempts which, at least in my opinion, are the ‘salt of editing’! First a simple introduction to explain what bump maps do:

(from wiki.ita …) “The Bump Mapping is a rendering technique of the materials that increases the complexity of the objects made, without increasing the number of polygons that make up the starting object (…)”

then the goal is to refine the details of a 3D object without having to spend more resources that would make the game less fluid, particularly on under-performing PC. In Fifa this technique (one of many versions) is used for example to make sure that the shirts appear realistic without having to increase the detail and the texture size (and thus, start by saying that, at least from this point of view, and to protect the friends with slower machines, is a bit inappropriate to make kits even in 3Gk!). But not only, with this method you can determine whether or not to apply a particular effect and to what extent.

How do they work? The idea is to use the colors of a second texture which overlays the first one, to define some behavior.
Let’s make an effort and imagine that you want to assign a “task” to each point of the main image based on the color of the corresponding pixel in the secondary (the bump map): we set such that if the pixels of the bump are red then the shirt at that point it will reflect the light, if they are of a different color no. Easy right? Too much, in fact. 😀

As I imagine almost everyone knows, the color of each pixel of an image is defined by three “numbers” (there is a fourth, the alpha channel that here we do not care…), which measure the three main components R red, G green, B blue. Our FIFA exploits these components (two out of three to be exact) to assign multiple behaviors using a single bump map.

Specifically, the R component defines precisely how much the shirt will reflect the light for each point. The G component  determines which texture will be applied to the underlying to better simulate the various parts of the fabric. The component B is not used and any setting produces no visible result. Original bump maps of the game, generally set this component to an average value (150/151), which means that almost always we admire a lot of “violet”… but we could also set it to maximum (255) and get the bumps decidedly bluish, without see anything different ingame.

High values in the R component of each pixel mean that at that point the shirt reflects the light much (with the sun, in the wet and at night), up to look like not realistic (as a TV with the contrast set to max!). An appropriate use of this component causes the shirt may reflect more in some places than others… It’s obvious that in reality, the white reflects more than the black: so a good bump for Juventus, sure, should not be uniform in its component of R! (look at the originals of Juventus, Inter, Barcelona). If we want to make sure to see sponsors, logos in their natural colors we should avoid too high values of R (losing something from afar); on the contrary if we like that they “shine its own light”, we will shoot a maximum value (personally I much prefer the first option!!).

The G component determines which “plot” (texture) of fabric will be overlapped, according to this table:

1-63 = tight points, slight visible, to simulate a standard fabric
64-127 = wide points, very visible, to simulate, for example under the armpit, transpiration areas ect…
128-191 = narrow horizontal stripes to simulate the texture of socks, cuffs ect …
192-254 = no plot
0 or 255 = points same as the first; if side by side they do not fit together and leave the intersection space “empty” …

It goes without saying that if the kit-maker draws its own fabric plots (as usually, by almost all the experts) … will have to make so that the bump maps present the appropriate component of green, to exclude the overlapping of a the standard plot that could compromise the hard work and the effect he wants (except, of course, for those combinations expertly designed on purpose)!

Guys, translate all this into English, it was very hard for me!! Sorry for errors. I hope this talk will be useful to many, so as to contribute to a general improvement in the quality of the works! Below, I enclose a handy template for use with Photoshop: to get the desired effect, just pick the color with the eyedropper tool and fill the desired area of your magnificent new bump map!

And this is the fruit of my work today, the third blue jersey of the Standard 2015-2016, made using the technique illustrated. In the .rar file that you can download HERE I’ve also included the script for automatic installation (it add the kit in the database without jeopardizing careers and tournaments in progress); give it ‘as food’ to the Installer and you’re done! 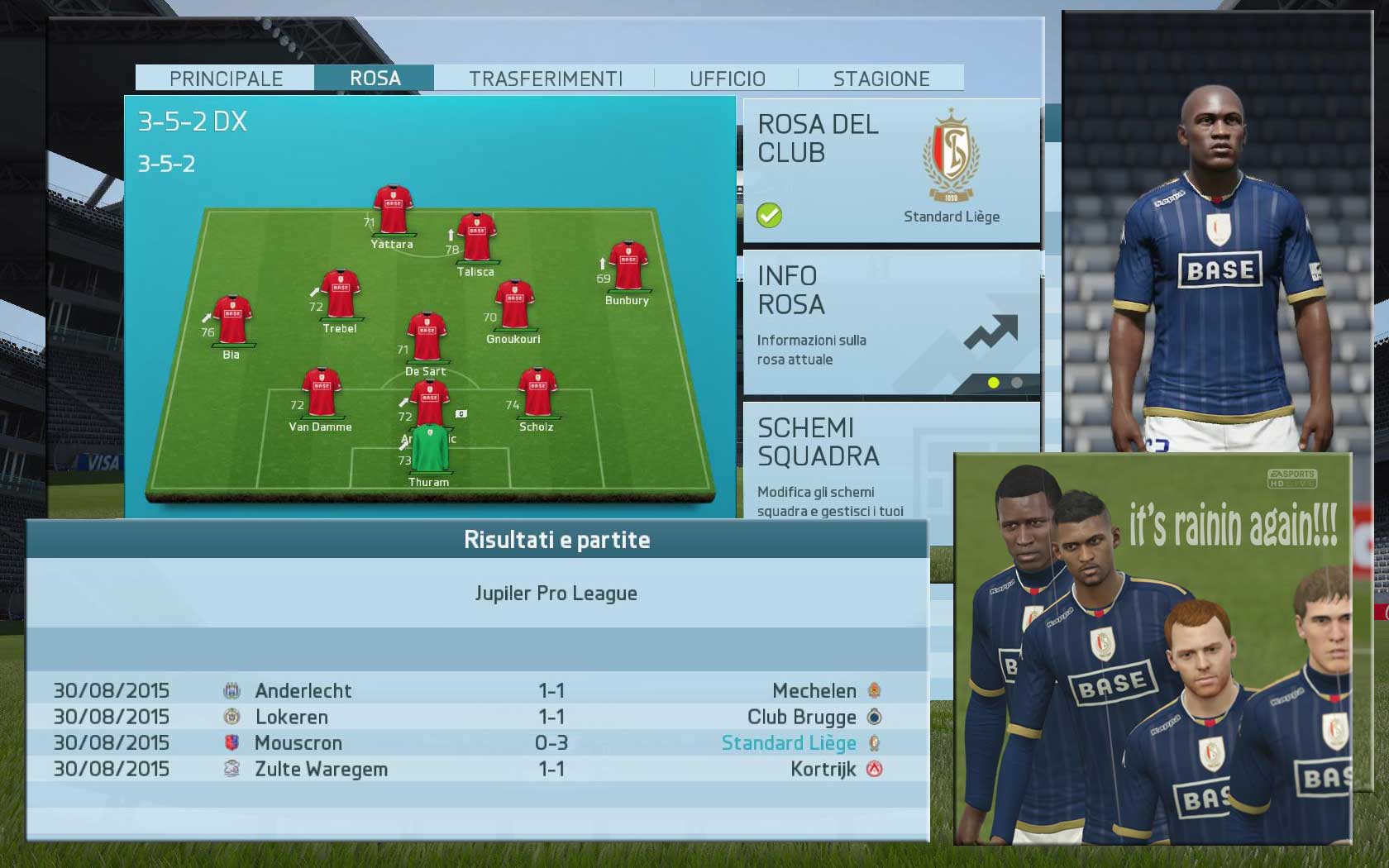 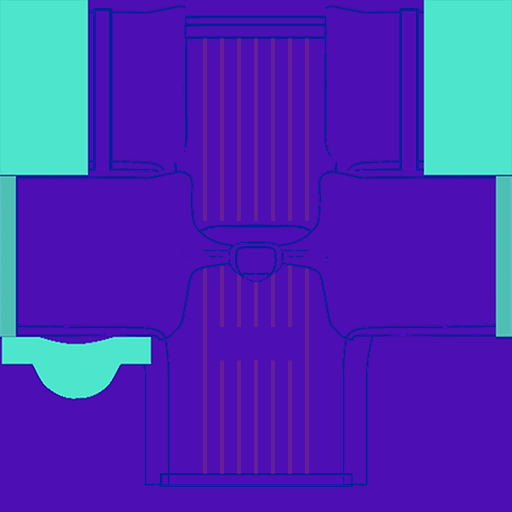 Hello everyone! I just got back from my wonderful holiday in Madagascar and I am here to check yo ...